I'm not even going to write anymore or even edit this review because I'm so sick of thinking about the mess that is 31.  This review may not be professional, but neither was the movie.


Rob Zombie movies have always polarized audiences. I myself have a love/hate relationship with them. Visually they are, in a way, very beautiful and unique. Take some of the shots from Halloween 2, they are downright gorgeous and I don't even like that film! Add in his uncanny ability to pick the perfect songs for his films and he can truly makes something wonderful. Just look at The Devil's Rejects as the perfect example of what he is capable of doing. Sadly his greatest weakness will always be his writing and 31 suffers from it. In fact it suffers from too many problems to count. Such a shame nothing about this movie works, I was very optimistic.

I've been trying for two weeks to write this god forsaken review for 31. That is way more time than any normal person should spend thinking about such an atrocious mess. Bottom line I hate this film. There are no likable characters, not even the villains are all that memorable, except for Doom-Head, but he disappears for most of the film and is underutilized.

The make-up and special effects are well done, when you can see them, but everything is obscured by the Rob Zombie seizure cam. Seriously someone give his cameraman some valium so he will chill the fuck out.  Maybe he is just trying to create the sense of chaos in the more violent scenes I suppose, but it does NOT work. That is unless his desired result is to give the audience motion sickness.

Ughhh, man, this is hard. I’m trying to be sort of nice about my hatred for this movie, but I can’t do it anymore. This is THE biggest pile of shit. I’d rather watch the abortion video I was forced to watch back in bible school (yup, that happened).  I’d rather stick a glass needle in my urethra and smash my dick with a hammer than watch this “film” again. If I were any of the actors in this film I would be embarrassed. Rob Zombie can do better.  The audience can do better.  Don’t watch this film.

Now that the dust and nerves have settled, I can finally sit back and reflect on what was possibly the best convention experience I've ever had.  Honestly I could probably say that after every single convention I attend as they have all been great so far. Something about this experience was different. Something sets this weekend above all of them. Was it that two of my podcast pals, Jason and Teri, were there with the wife and I? Maybe. Perhaps it was meeting the main cast plus the director of one of my all time favorite movies, Night of the Creeps? Big possibility. Could it have been meeting the iconic Piper Laurie? Watching my wife absolutely go bonkers meeting one of her favorite actors (Dean Camerion)? Each of those on their own make for a great time, hell, even an outstanding time. Yet what happens if you slap all of those together? BAM! Best. Convention. Ever.  Also...


Caroline Munro.  A name that many genre fans should instantly recognize just from her work in Maniac alone, stars in a film about a nerdy loser getting revenge on his high school class mates that did him wrong .The premise sounds simple enough, which it is, and let’s be honest this kind of film always has a simple premise. But what I love about this film is the casting of a 36 year old Caroline Munro as a teenager.  Yup, a 36, albeit still very sexy 36 year old woman plays a teenage.  I know the industry has, and always will, cast older actors for a movie about teenagers. That’s just how the world works, but Christ, that is just over the top. However, let’s be honest, if you are watching a movie called Slaughter High, you don’t give two fucks about the ages of the actors or their acting ability. They are just there to be murdered.

Originally named April Fool’s Day, the film was released at the tail end of the what some consider to be the heyday of the slasher.  Does it show?  Of course it does.  Formulaic plot for starters, but there is a lot to love about this film. Take the score by Harry Manfredini of Friday the 13th fame.  It is always a joy to see his name in the credits and this is no exception. The main theme is oddly upbeat for this type of film, but it does a superb job setting the tone for what becomes a fun, gory flick.
Now for the highlight of any good slasher film; a memorable killer! In this film we have poor, nerdy Marty, fantastically played by Simon Scuddamore in his one and only acting credit (more on that in a bit).  This dude just can’t catch a break.  He is a loner and a loser just trying to survive high school, but this is high school and the cool kids can’t leave well enough alone.  After a few pranks, one of which goes horribly awry, Marty is left badly burned and in the hospital.  A few years down the line and his tormentors are invited back to the high school for a reunion by persons unknown. And thus begins the revenge. See? Basic plot. That doesn’t matter to me because Marty wears a creepy jester mask while exacting his revenge. Seriously, the mask is awesome and just as cool as any other iconic slasher mask from the era. 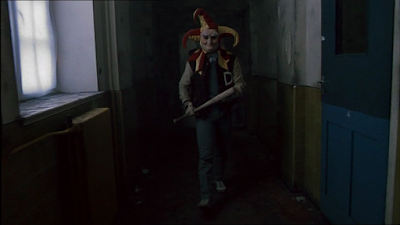 As for the kills I don’t want to divulge too much because for me, that is one of the best parts of any film of this nature.  Seeing fun and creative kills is always such a joy the first time around and I don’t want to spoil them for anyone reading this that hasn’t seen the film.  People can spoil the plot for me for just about any slasher and I won’t care. However, if you spoil the kills I will drop kick your ass onto the deer antlers hanging from the wall! Not saying they are the greatest kills ever, but some of them are a cut about the rest.

As I mentioned earlier, I would discuss more about Simon Scuddamore in detail.  Sadly, on November 21st, 1984 the promising  young actor chose to end his live at the age of 28.  His role as Marty is by far one of my favorite characters of any horror film, so it is a huge shame that he never got to feel the love from his fans from all over the globe.


Over all, this is a film that doesn’t get the love or attention that it deserves and that’s a shame. Many have dismissed it over the years because it was late to the slasher game.  However, if you can look past the flaws, you have a fun as hell film to watch with friends or if you are like me, alone.
Posted by norealme at 2:37:00 PM No comments:

This will be the future home of all my reviews.  Check back in the near future for my first review!
Posted by norealme at 4:42:00 PM No comments: